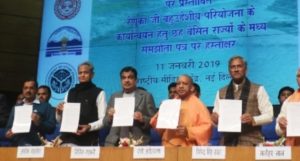 Six states–Haryana, Himachal Pradesh, Uttarakhand, Delhi, Rajasthan and Uttar Pradesh–on Friday signed an agreement for construction of Renukaji Dam Multi-Purpose Project in the presence of Union Water Resources Minister Nitin Gadkari. Chief Ministers ML Khattar, Jairam Thakur, TS Rawat, Arvind Kejriwal, Ashok Gehlot and Yogi Adityanath signed the agreement.
The 148-meter-high Renukaji dam would come up in Himachal Pradesh’s Sirmour district at a cost of Rs 4,596.76 crore. The central government will contribute Rs 3,892.83 crore, or 90% of the cost of the irrigation and drinking water component of the project, while the rest will come from the states.
The project is proposed to be executed by Himachal Pradesh Power Corporation Ltd. The live storage of the Renukaji Multi-Purpose Project is 0.404 million acre-foot and it would ensure supply of 23 cubic metres per second water to the basin states. The project will also generate 40 MW of power and the Delhi government has agreed to fund 90% of the cost of the power plant. The Central government has so far released Rs 446.96 crore for this project. Among states, Delhi has released Rs 214.84 crore and Haryana, Rs 25 crore.