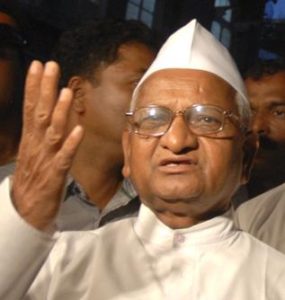 Anna Hazare real Name Kisan Bapat Baburao Hazare was born 15 January 1940 is an Indian social activist who is especially recognized for his contribution to the development of Ralegan Siddhi, a village in Parner taluka of Ahmednagar district, Maharashtra, India and his efforts for establishing it as a model village, for which he was awarded the Padma Bhushan by the Government of India in 1992.
Anna Hazare in Indian Army: Anna Hazare started his career as a driver in the Indian Army. He spent his spare time reading the books of Swami Vivekananda, Mahatma Gandhi and Acharya Vinoba Bhave that inspired him to become a social worker and activist. During the Indo-Pakistani War of 1965, he was the only survivor in a border exchange of fire, while driving a truck. During the mid-1970s he was again involved in a road accident while driving. In 1978, he took voluntary retirement from the 9th Maratha Battalion and returned home to Ralegaon Siddhi, a village in Maharashtra’s drought-prone Ahmadnagar.
Anna Hazare and Lokpal Bill: On 5 April 2011, Hazare started a ‘fast unto death’ to exert pressure on the Government of India to enact a strong anti-corruption act as envisaged in the Jan Lokpal Bill, a law that will establish a Lokpal (ombudsman) that will have the power to deal with corruption in public offices. The fast led to nation wide protests in support of Hazare. The fast ended on 9 April 2011. All of his demands of the movement are agreed by the Government of India and Government issued a gazette notification on formation of a joint committee headed by senior minister Pranab Mukherjee to draft an effective Lokpal Bill.
Anna Hazare Anti Corruption Movement: 2011 Indian anti-corruption movement is an ongoing demonstrations and protests occurring in India intended to establish a strong and independent legislation against endemic corruption. The movement has gained momentum in particular since 5 April 2011, when Anna Hazare, a prominent activist, first went on a hunger strike which he called a “fast unto death”. The main aim is to clean up corruption in many departments of Indian government through a law called “Jan Lokpal Bill”. On the morning of 16 August, 2011, Hazare, along with close associates, was remanded to judicial custody for seven days. After protests all over India, the Delhi Police decided to release Hazare after he had been sent to Tihar Jail for seven days. On 19 August, at around 12noon IST, Anna left Tihar jail after 3 days. Supporters welcomed him with spontaneous roar as he headed towards Delhi’s Ramlila Maidan to launch his hunger protest.
Anna Hazare broke his fast after 288 hours on the 13th day at the Ramlila Maidan in Delhi as huge crowds witnessed and celebrated the victory of people’s power. Anna ended his fast after Parliament adopted the Sense of the House resolution on his three key points on Saturday. Two five-year old girls from Delhi offered coconut water and honey to Anna Hazare
Post Views: 243
India News People Politics