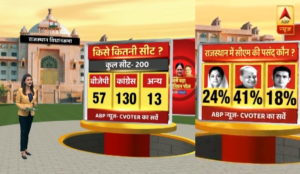 A recent ABP-CVoter opinion poll shared ahead of the Assembly elections in Rajasthan shows the Congress getting a majority in state, with the incumbent BJP falling much behind. For the 200-seat Rajasthan Assembly, the Congress has been projected to get a whopping 130 seats, while the BJP is getting 57 seats. The projection for the Others is 13. This marks a complete reversal of the number of seats bagged in the 2013 Assembly elections, wherein BJP bagged 163 seats, far ahead of the 21 seats the Congress got.