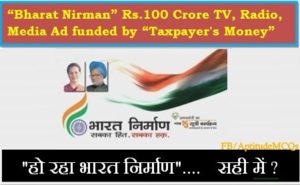 UPA’s launches “Bharat Nirman” Ad Campaign on all major Private TV channel including doordarshan and Radios in Rs. 100 Crore and buzz over it being funded by taxpayer’s money.  Government says that Government do not have money so reduction in subsidy, do not have funds so allow FDI in retail but UPA has cleared nearly Rs 100 crore to be used by the Directorate of Advertising and Visual Publicity (DAVP) for releasing advertisements on radio, television, and print. Now CNN IBN has reported that government has sanctioned Rs 100 crore to advertisements on television, radio and in print showcasing the government’s achievements. However, Information and Broadcasting Minister Manish Tewari claims this is no election campaign and merely highlights the achievements of the UPA government over the last nine years. And he definitely doesn’t see any similarities with the National Democratic Alliance’s ‘India Shining’ campaign in 2004. “India Shining was hype, hoopla and spin. Our campaign is different. Bharat Nirman is not a poll campaign, it tells the India story of the past nine years,” Tewari told CNN-IBN today.  The good news is that the campaign will end by February 2014 if the government lasts till then. Earlier if it doesn’t.
UPA II was marked by charges of scams and corruption. Will Prime Minister Manmohan Singh and Sonia Gandhi be able to provide image rebuilding governance in the last lap?It is the duty of any incumbent government to dispel misgivings created by the Opposition. People’s mood is clear if you go by the results of recent state assembly polls.  People of this country know the truth. Series of scams and cases of corruption have been exposed under UPA II. Will lead partner Congress’ fate be the same as BJP’s in 2014 LS elections. Jeevika (Jeeta Vimukti Karnataka), an NGO, which has taken up the cause of bonded labourers in the State, has viewed as shocking, ridiculous and misleading the claims of Bharat Nirman on the exploitative bonded labour system through its advertisement in the print media under the title “Thanks to MGNREGA, no bonded labour anymore.” It seems the authorities of Bharat Nirman, a programme for rural infrastructure development being implemented by the Union government, are not aware of the facts or of how farm labourers have been converted into bonded labourers in different States, said Kiran Kamal Prasad, State coordinator of Jeevika in Recent story on Leading New Paper THE HINDU. A lot of money went into producing the commercials allegedly Rs16 crore – which have been directed by filmmaker Pradip Sarkar.
Now comes the Million $ question, “Bharat Nirman” TV commercial tag line says ” सबका हित, सबका हक़”..Did you really see any benefit in spending your hard earn money in TV, Radio Advertisement instead of some work for people’s welfare or they could have developed Five Villages into Model villages in Rs. 100 Crore fund.
Post Views: 173
Editorial India News People Politics