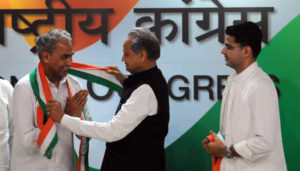 Harish Chandra Meena, a BJP parliamentarian in Rajasthan and former top police officer, has quit the ruling party and joined the Congress weeks before assembly polls in the state. Harish Meena, 64, is the MP from Dausa. A former Director General of Police, he had joined the BJP in 2014 after quitting service.
His exit is seen as a big blow to the BJP, which is fighting for another term in Rajasthan. Harish Chandra Meena joined the Congress in the presence of former Rajasthan chief minister Ashok Gehlot and Sachin Pilot, whose father Rajesh Pilot held the Dausa constituency. “I am happy that Harish Meena has decided to join the Congress in such times. I welcome him to the Congress,” Mr Gehlot said.
Mr Meena’s brother Namo Narayan Meena is a senior Congress leader. They faced off against each other in the 2014 Lok Sabha election. The Congress lost Dausa as Harish Meena defeated his older brother. Another brother OP Meena retired as chief secretary of Rajasthan. The Meenas are an influential community in Rajasthan and among the most significant voters in east Rajasthan. Meena voters dominate politics and government services. Harish Meena was police chief in 2009-2013, among the longest for any top cop in Rajasthan.