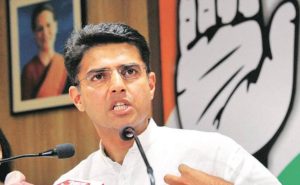 Rajasthan Congress chief Sachin Pilot Wednesday accused the BJP-ruled states of being “insensitive” towards farmers and suppressing their voice. “In the last few days, farmers demanded relief from the governments in Maharashtra and Madhya Pradesh. But, instead of paying heed to their demands, they killed them with bullets,” he said in a statement. Accusing the BJP governments in Maharashtra, Rajasthan, Madhya Pradesh and Uttar Pradesh were neglecting the farmers’ issues, Pilot said about 60 farmers in Rajasthan have committed suicide due to the lack of government support or crop damage.
Meanwhile in recent development Congress vice president Rahul Gandhi climbed on a bike today as his convoy was stopped near Madhya Pradesh’s Mandsaur, where farmer protests have escalated over the death of five in police firing on Tuesday. Mr Gandhi first flew down to Udaipur in adjoining Rajasthan and drove from there. At a spot where heavy police presence was seen, the Congress leader was seen jumping onto a bike to try and reach Mandsaur. A crowd of Congress workers, journalists and policemen could be seen chasing the bike for some distance. Sachin Pilot, the Rajasthan Congress chief, also drove off in another bike.