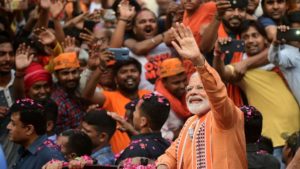 Riding on a massive Modi wave, the Bharatiya Janata Party swept Rajasthan once again in the Lok Sabha election results 2019 Thursday, five months after losing to Congress in the state Assembly polls. The party has won 24 of total 25 Lok Sabha seats in the state while ally Rashtriya Loktantrik Party won the other seat.
Former chief minister Vasundhara Raje credited the victory to Prime Minister Narendra Modi, saying, “This is not a wave or a tsunami, this is the magic of NaMo.” She said the visionary leadership of Modi and Shah had helped the party register a historic win. Addressing newspersons at the BJP office, she said, “I had stated earlier that all 25 Lok Sabha seats of Rajasthan will be won by BJP and more than 300 seats in the country, to form Modi government again.”
Chief minister Ashok Gehlot said the Congress accepts its defeat with humility. “In a democracy the people’s mandate is above all and we accept it with humility,” he said. He however criticised the BJP and Modi,saying that for the Congress the country is above all, while for BJP power is important.