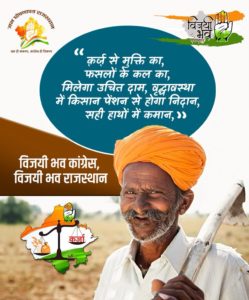 Rajasthan Congress chief Sachin Pilot and AICC General Secretary Ashok Gehlot during the release of their party’s election manifesto in Jaipur. Pilot said the manifesto was prepared after taking opinions through multiple platforms such as social media. Two lakh suggestions were received for the preparation of the manifesto, he said.
Pilot said the Congress party will waive the loans of farmers if voted to power, an announcement the party president had made during an election meeting in Jaisalmer’s Pokhran Assembly constituency on Monday. He said the Congress intends to give Rs 3,500 monthly allowance to unemployed youths in the state. The party has also promised to bring a legislation for the protection of journalists in the state. The party has promised to form an implementation committee for time-bound implementation of the manifesto. The assembly election is scheduled for December 7.