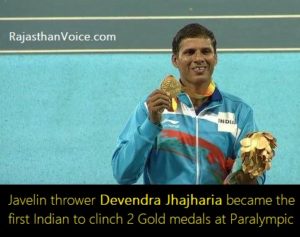 Javelin thrower Devendra Jhajharia became the first Indian to clinch two gold medals at the Paralympics after he broke his own world record to clinch the top honours at the Rio Games. Devendra, who won his previous gold in the 2004 Athens Games, bettered his own world record to finish on top in the men’s F46 event. Devendra, whose previous best was 62.15 metres (achieved in the 2004 Games), improved the mark with an attempt of 63.97 metres at the Olympic Stadium (Engenhao). India now have two gold, one silver and one bronze in the ongoing edition of the Games.
The 35-year-old who is now employed by the Sports Authority of India as coach hails from a remote village in Churu district of Rajasthan. Now 2-time gold medallist lost his left arm when he was nine in an electric shock. He was awarded the Arjuna award in 2004 and the Padma Shri in 2012, becoming the first Paralympian to receive the honour. He last participated in the Paralympics 12 years ago. The F46 event did not feature in the 2008 and the 2012 editions.
Congratulation Mr. Devendra Jhajharia for making Nation Proud.