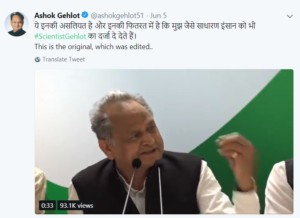 Sambit Patra, national spokesperson of the BJP tweeted about this video with the words: “Is it authentic? Is this the way Congress misguided our farmers?” It was also shared by Akhilesh Mishra who is a former director of MyGov India. Mishra has now deleted his tweet. It has been tweeted by several others who are followed by the prime minister on the social media platform.

When Ashok Gehlot came across the trending clip he got a 440-volt jolt and soon tweeted the full clip where the comment can be heard in its entirety. According to Gehlot, when he was young he had witnessed how Jan Sangh cadres were spreading misinformation about the Bhakra dam which was inaugurated by former PM Jawaharlal Nehru, spreading rumours that once electricity is removed from water, the water will become useless. He had said, “I remember, during childhood there was the Jan Sangh. When the Bhakra dam was built, Jan Sangh cadres used to preach that ‘Pandit Nehru has lost it. He is building a dam, on which he will construct a hydro power plant. If electricity is removed from water and the water goes to the farm, such water will have no energy and will be useless in the farm.”