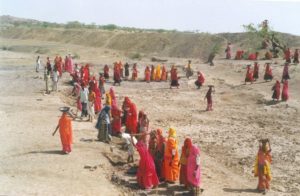 Dangling Pinter is a term in Computer Science used for a Pointer that do not point to a valid object of the appropriate type. The same principle is applied for the fate and future of rajasthan. A state that is fighting with drought and caste based fight from last 50 years. Rajasthan, the first image comes in mind is a state with full of color and magnificent history. This truth have many faces behind it. People of rajasthan are fighting with Drought from continuous 15 Year. People are surviving in deserts from hundreds of years, that make them special.
85% of rajasthan people lives in villages and their life depends on rainfall and as usual Rajasthan is one of the worst affected states. There are areas where people have not experienced even one proper shower during the whole monsoon period. This is the fifth continuous drought in the state. Approximately 40 million people and 50 million cattle have been affected this year alone. The water table is going down, wells and handpumps have gone dry. Livestock have started dying of hunger and thirst. People have started abandoning their cattle after praying to god for their lives. Migration to cities and other states is up. Social structures in villages have suffered. There is a dreary stillness in the air. That is real face of rajasthan but no one want to even talk about such thing. those who are ill literate can’t raise their voice and government bureaucrats and politician have no time to listen their voice except 10 days before election, which unfortunately comes only once in five year.
Government have their own issues how to make publicity. Money spend by Government in Hording for a Yojana cost more than that benefit of that Yojana. But who bother about these things. There are only one solution which can brings true color in the state, WATER. But that is the fate and future of rajasthan that no one even think about this. Govt. spend thousands of crore for Water preservation and water supply but half of money goes to NGO’s Owner. There are thousands of NGO’s running in the state from which 50% belogs to politicians and their relatives, so money comes and goes to the same person making a Big Zero for state and people. The fate of rajasthan is in NGO’s and Government who didn’t have time to think for people so future is definitely dark and may be second Bihar of India if people or govt. didn’t awake and make some great decision for state and people living in villages.