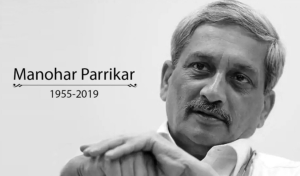 Goa CM and former defence minister Manohar parrikar passes away on 17th March 2019 after prolong illness. He was 63. Parrikar was suffering from advanced pancreatic cancer and had been in and out of hospitals in Goa, Mumbai, New York and New Delhi over the past year. Parrikar had undergone treatment at several hospitals in the US, Mumbai, Delhi and Goa.He is survived by two sons. His wife Medha Parrikar died twelve years ago.
Earlier Saturday morning, reports emerged that his health had taken a turn for the worse after his blood pressure reportedly dropped. “Extremely sorry to hear of the passing of Shri Manohar Parrikar, Chief Minister of Goa, after an illness borne with fortitude and dignity,” President Ram Nath Kovind tweeted. Hours earlier, Parrikar’s office had tweeted that his condition was “extremely critical” and “doctors are trying their best”.