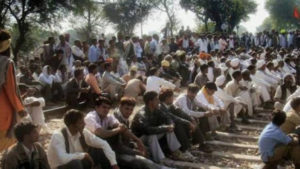 In Rajasthan, Gurjar agitation continued and Delhi-Mumbai railway track is still blocked at Malarna Dungar in Sawai Madhopur district. Due to this, 26 trains are plying through diverted routs and 12 others cancelled yesterday. Agitation has now spread to Dholpur, Bundi and other districts.Protesters also blocked road traffic at Gudla in Kaurali, Asind in Bhilwara and Nainva in Bundi district. An intelligence has been sounded in Dausa district also. DGP law and order M L Lather told AIR that total five FIRs have been registered in connection with the Gurjar agitation.
Cabinet Minister Vishvendra Singh constituted a 30 member committee of Gurjars who will now mediate between the protesters blocking railway tracks and the government. State Human rights commission has asked the govt. to describe about the steps taken for the people who are under the influence of Gurjar agitation. Gurjars are demanding separate 5% reservation under special Backward classes quota in govt. jobs, raising limit of creamy layer up to Rs. 8 lac per annum and filling of backlog in appointments.