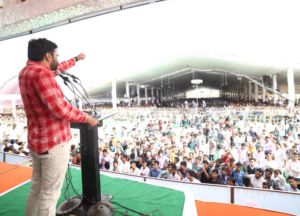 Independent legislator and Jat leader Hanuman Beniwal will soon launch his new party in Rajasthan. Mr Beniwal, who represents Khinvsar constituency of Nagaur district, said he will hold a mass rally in Jaipur in the next few days where he will announce the new party. “I am going to announce my new party in a mass rally in Jaipur in next few days. This will support third front in the state which is immensely needed because people are suffering from the misrule of BJP and opposition Congress too could not act as an effective opposition in the state,” Mr Beniwal told PTI. “Issues of farmers and youths are prominent this time and my party will contest on elections on many seats on these issues,” he said.

Several parties including Left parties have come together to form an alliance against the BJP and Congress in the poll-bound state. Forty-six year old Mr Beniwal who won his first election as a legislator on BJP ticket in 2008, said he was well in touch with other dissents of the saffron party and would create the alliance with them. Mr Beniwal, Ghanshyam Tiwari and Kirori Lal Meena had quit the BJP at different point of time due to differences with Rajasthan Chief Minister Vasundhara Raje. The trio of Hanuman Beniwal, Ghanshyam Tiwari and Manvendra Singh’s pose the biggest challenge for the BJP and congress in the upcoming elections.