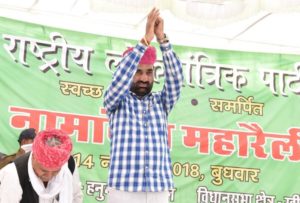 Independent MLA Hanuman Beniwal on Sunday said his Rastriya Loktantrik Party will contest all 200 assembly seats in the state. He expressed confidence over leading a third front in the state. “I am in advance talks with other parties for a tie up and formation of a third front. We (RLP) will contest all 200 seats and the results will be quite different from the past results. The third front will be a crucial factor in deciding results this time,” he said. Beniwal said he has held discussions with the top brass of BSP, former BJP leader Ghanshyam Tiwari who has floated his Bharat Vahini Party and others for formation of the third front. He said details on the alliance will be announced depending on the outcome of talks in the next few days. “It will be a strong third front and thus both BJP and Congress are scared. The public is fed up with both parties as they have misled the people. They failed to fulfill promises made in their manifestos,” he said.
Beniwal belongs to the Jat community, which is a prominent demographic in the state. He hopes to win at least 30 seats in the December 7 elections. Beniwal is banking on Jat votes in Shekhawati and Marwar region where he has held several rallies. “I have been working on the ground and have received a positive response. BJP and Congress are corrupt parties and people want an alternative. This time the voters will have that,” the MLA from Khinvsar (Nagaur) told PTI. He said his party will declare the list of candidates in a couple of days, after the Congress and BJP announce their candidates. He said loan waiver for farmers, jobs to youths, free electricity, anti-corruption will be the issues he will focus on before the elections. Founder of Bharat Vahini Party Ghanshyam Tiwari said a third front will emerge in the state. “We (several parties) are in advance talks and a third front will be formed this time. We will declare our candidates after the lists of BJP and Congress (are released),” he said.