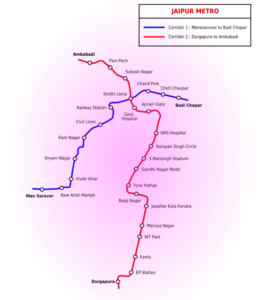 Jaipur Metro is a rapid transit system in the city of Jaipur. Construction on the mostly elevated part of the first line, called Phase 1A, comprising 9.63 kilometres (5.98 mi) of route from Mansarovar to Chandpole Bazaar, started on 13 November 2010,  and was completed in 2014.  Phase-I A (9.63 km) was completed in 2014, and Phase-I B and Phase II are scheduled for completion in 2018 and 2021, respectively.  Among the Rapid Transit systems of India, it has been recorded fastest to conduct of trial run after starting construction, when it commenced trial runs in Jaipur on 18 September 2013 flagged off by the then Chief Minister of Rajasthan Shri Ashok Gehlot.

The first route of Jaipur Metro (East-West Corridor) will connect Mansarovar to Badi Chaupar via Civil Lines and Chandpole. In Phase I-A, the metro is operating between Mansarovar to Chandpole. The construction of Phase-I B between Chandpole and Badi Chaupar is under process and is awaited to be completed. This is the Metro line that got flagged off on 5 June 2015, and has been named as Pink Line, as it takes passengers to the Pink City.[2] The depot for this line is situated at Mansarovar. Jaipur Metro was planned to be built in phases.

The Pink Line will be realized with the completion of Phase 1B (2.349 kilometres (1.460 mi), 2 stations), which is scheduled for completion in 2018.[1] Construction has already begun on this. As of August 2017 the tunnel excavation work between Chandpole and Badi Chaipar is complete.

Phase II (North-South Corridor) which is scheduled for completion in 2021. The Orange Line will be 23.099 kilometres (14.353 mi) and serve 20 stations when complete. This will connect Sitapura Industrial Area in the South to Ambabari in the North via Ajmeri Gate and MI Road. The tracks will be elevated between Sitapura and Ajmeri Gate and then will go underground. There might be some changes in plan before actual construction starts on these lines.