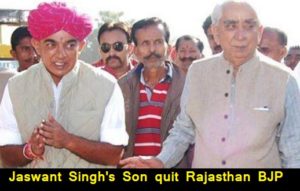 Former union minister and BJP top leader Jaswant Singh’s Son Manvendra Singh left BJP on Saturday. He said that it was his biggest mistake to join the BJP. Singh ties with the BJP have been strained ever since his father was denied a ticket in the Lok Sabha elections 2014. Manvendra announced his decision in ‘swabhiman rally’ in Pachpadra on Saturday. The rally was called after what was seen as a snub to him by Chief Minister Vasundhara Raje who skipped Manvendra’s assembly constituency when she came to Barmer for her ‘Gaurav Yatra’ early this month.
Singh commenting on its upcoming plan to join Congress said, “I would like to thank my supporters. I will do whatever they ask me to do. Their decision is my decision but I will ask everyone.” A key leader during the Vajpayee era, Jaswant Singh contested the election as an independent candidate against the BJP’s Colonel Sonaram Choudhary. However, he lost. Manvendra despite being BJP MLA had campaigned for his father. “Kamal ka phool hamari bhool thi,” said Manvendra who was buoyed by the impressive turnout in the rally that mostly consisted of Jaswant Singh’s loyalists.