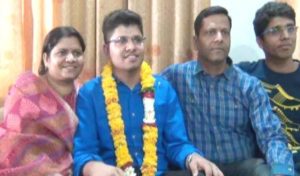 Kalpit Veerwal from Udaipur, Rajasthan, has topped the Joint Entrance Examination Main 2017 scoring full marks. He topped in the general as well as Scheduled Caste (SC) category. He is the first student to score 360 out of 360. A student of MDS senior secondary school in Udaipur, Kalpit is now awaiting his Class 12 exam results. But his eyes are already set on the next target: the JEE (Advanced) examination for IITs on May 21. The results were declared on 27th April 2017.
Veerwal’s father works as a compounder at Udaipur’s Maharana Bhupal Government Hospital and his mother is a teacher at a government school. He has an older sibling who is studying at the All India Institute of Medical Sciences in Delhi. Over 10.2 lakh students had appeared for the exam at 1,781 centres across the country. The examination was held on 2 April (offline) and 8 and 9 April (online). Candidates clearing the JEE-Main will be eligible to appear in the JEE-Advanced exam, 2017. The JEE is conducted for admission to B.Tech, BE and B.Arch programmes offered at IITs, NITs, IIITs and other government-approved engineering institutes.