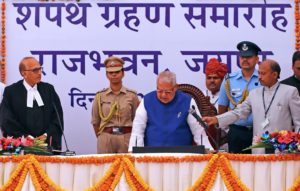 Former Union Minister Kalraj Mishra will take oath as the new Governor of Rajasthan on 9th September 2019. Mishra, the BJP leader and veteran politician, will suceed former Uttar Pradesh Chief Minister Kalyan Singh, who recently completed his five-year tenure as the Rajasthan governor. Several politicians, dignitaries, including Rajasthan Chief Minister, Ashok Gehlot, Deputy Chief Minister, Sachin Pilot and a slew of cabinet ministers are likely attend the oath-taking ceremony of Kalraj Mishra. On Sunday, Mishra reached Jaipur Airport where he was welcomed by Ashok Gehlot, Sachin Pilot, Assembly Speaker Dr CP Joshi amongst others.
Mishra (78), who became 22nd Governor of Rajasthan, was given the guard of honour after the oath ceremony. Rajasthan High Court Chief Justice Shripathi Ravindra Bhat administered the oath of office and constitution to Mishra. Speaking with the media after the ceremony, Mishra said that, in the future, he would like not to receive the guard of honour and would like to discontinue the formality. Former Governor of Rajasthan Kalyan Singh had also decided not to receive the guard of honour. Mishra has replaced Kalyan Singh, who completed his five-year tenure. Prior to Rajasthan, Mishra was the Governor of Himachal Pradesh.