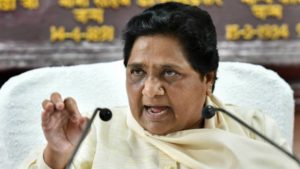 BSP chief Mayawati on Wednesday announced her party will not forge an alliance with the Congress “at any cost” for the upcoming Assembly polls in Rajasthan and Madhya Pradesh, dealing a blow to the opposition’s efforts to stitch a united front against the ruling BJP ahead of 2019 Lok Sabha elections. Blaming the Congress for what she called its “arrogance” and “stubborn attitude”, the former Uttar Pradesh chief minister also said even though Congress chief Rahul Gandhi and his mother Sonia Gandhi appeared in favour of an alliance, there were other “senior leaders” who worked to foil any possibility of an understanding.
Mayawati alleged the Congress had not mended itself and like the BJP betrayed her party. Apparently stunned by Mayawati’s announcement, the Congress hoped the BSP chief reposing her faith in Rahul and Sonia Gandhi will provide it a window of opportunity and “creases will be ironed out” with harmony.
“The Congress is under the wrong impression that it can match all the tactics of BJP…If the BJP faces just the Congress, it can easily form the government. Still the Congress does not seem prepared for an honest alliance between opposition parties,” Mayawati said in a statement circulated by the Bahujan Samaj Party(BSP).