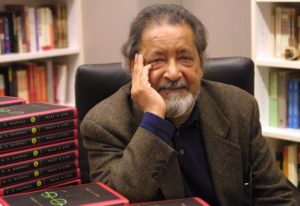 Nobel laureate and noted writer VS Naipaul passes away in London at 85, President and Prime Minister express condolences. Nobel prize-winning British author Sir Vidiadhar Surajprasad Naipaul has passed away at the age of 85 years. Sir Naipaul wrote more than 30 books and won the Nobel Prize for literature in 2001. Many of his works examined the trauma of post-colonial transition. He was one of the first winners of the Booker Prize in 1971 for “In A Free State.” President Ram Nath Kovind and Prime Minister Narendra Modi condoled demise of the Nobel laureate.
The President in a tweet said, Sad to learn of the passing of V.S. Naipaul whose books are an penetrative exploration of faith, colonialism and the human condition, in his home in the Caribbean and beyond. A loss for the world of letters and for the broader school of Indo-Anglian literature. The Prime Minister in his tweet said, Sir VS Naipaul will be remembered for his extensive works, which covered diverse subjects ranging from history, culture, colonialism, politics and more. His passing away is a major loss to the world of literature. Condolences to his family and well wishers in this sad hour.