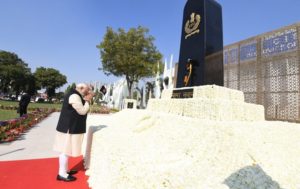 Prime Minister, Shri Narendra Modi, today, attended the 50th Raising Day celebrations of Central Industrial Security Forces (CISF), at Indirapuram in Ghaziabad, Uttar Pradesh. The Prime Minister reviewed the parade of the CISF personnel. He presented the service medals for distinguished and meritorious services. He laid wreath at the Martyr’s Memorial and signed the visitor’s book. Addressing the CISF personnel, the Prime Minister congratulated the forces for its Golden Jubilee. He praised the role of CISF in safeguarding and protecting the vital institutions of the country. He added that the responsibility of safeguarding the modern infrastructure built for New India is in the safe hands of CISF.
The Prime Minister urged the citizens to cooperate with the security personnel. VIP culture creates hurdle in security architecture. Hence, it’s important that the citizens cooperate with the security personnel, PM said. To create awareness amongst the general public regarding the role and functions of CISF, Prime Minister suggested the idea of starting digital museums at airports and metros, showcasing the work of CISF. Hailing the role of CISF in securing the critical infrastructure of the country, Prime Minister said that the force is also involved in disaster response, ensuring safety of women and many other activities. In this context, Prime Minister spoke about the disaster relief operations of CISF during Kerala floods and also during Nepal and Haiti earthquake The Prime Minister said that his government is committed towards ensuring the safety of its security forces. In this context he mentioned about the initiatives of the Government to modernize the forces and the actions taken for their welfare. Stating that duty is the festival for the armed forces, Prime Minister said that the role of CISF has increased, due to the challenges posted by terrorism. He added that his government is committed towards eliminating terrorism.
The Prime Minister said that the National Police Memorial is a dedication to the valour and sacrifices made by the police and paramilitary forces. He said the monuments like National War Memorial and National Police Memorial will create awareness amongst the citizens regarding the contributions of security forces. He hailed the efforts of CISF in inducting many women soldiers into its force As India grows, the roles and responsibilities of CISF will also grow commensurately, PM said.