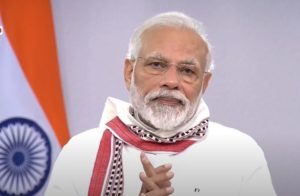 Prime Minister Narendra Modi on Tuesday announced that the lockdown across the country will be extended till May 3 to fight the coronavirus pandemic, saying the measure has produced a significant outcome in containing the infection. Prime Minister Modi said implementation of the lockdown will be strictly ensured in its second phase and detailed guidelines will be brought out on Wednesday to ensure that outbreak does not spread to new areas. Some relaxations may be allowed after April 20 in places where there are no hotspots, he said. “Follow the rules of lockdown with full devotion till May 3, stay where you are, stay safe,” the prime minister told citizens.
PM Modi said India has managed to contain the pandemic well compared to many developed countries due to its holistic approach in dealing with the crisis and sacrifices made by people of the country in the fight produced tangible results. The prime minister sought the support of the people in seven areas, including taking care of elderly people, maintaining social distancing and helping the poor and downtrodden. “If India would not have adopted a holistic approach, if an integrated approach was not initiated, India’s situation would have been different (compared to many developed countries). It is clear from the experiences of the past few days that the path we have chosen is right,” the prime minister said.

India, he said, received huge benefits from the 21-day lockdown in checking the pandemic, adding that the country has dealt with the situation better with “limited resources”. The prime minister said some relaxation may be allowed in some areas and the scope of coronavirus testing will be expanded significantly. “Till April 20, every town, every police station, every district, every state will be tested on how much they are adhering to the lockdown; how much the areas have protected themselves from coronavirus. It will be observed. Some necessary activities may be allowed in areas that will pass this litmus test; areas which will not be among the hotspots and are less likely to turn into hotspots,” he said.

The prime minister said India may have paid a big economic price, but there can be no alternative to saving human lives. “India’s fight against coronavirus is going on very strongly,” Modi said, adding that there is adequate stock of medicines and rations in the country.
The fight against COVID-19 will be made more stringent in next one week, he said, asserting that new hotspots will create new crises. Late last month, the government announced a Rs 1.7 lakh crore package aimed at providing relief to those hit hard by the lockdown as well as an insurance cover for healthcare professionals handling virus infected people. Prime Minister Modi said India has done well in containing the pandemic compared to many other countries. “You are fulfilling your duties like a disciplined soldier,” PM Modi said, hailing the people for their support in stemming the spread of the virus.