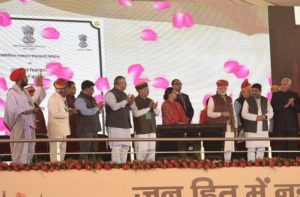 Prime Minister, Shri Narendra Modi, today addressed a large and enthusiastic public meeting on the occasion ofthe commencement of work for the Rajasthan Refinery at Pachpadra, in Barmer, Rajasthan. Congratulating the Chief Minister of Rajasthan, Smt. Vasundhara Raje, and Union Minister of Petroleum, Shri Dharmendra Pradhan, on the occasion, the Prime Minister observed that a few days ago, India marked Makar Sankranti with great fervour. This festive season is the harbinger of prosperity, he added, saying that immediately after the festivities, he is delighted to be in Rajasthan for a project that will bring happiness and prosperity in the lives of many.
This is a time for ‘Sankalp Se Siddhi.’ We have to identify our targets and work towards achieving them by 2022, when we mark 75 years of freedom, the Prime Minister said. The Prime Minister recalled the contribution of former Vice President and former Rajasthan Chief Minister, Shri Bhairon Singh Shekhawat, and said that he had worked towards modernising Rajasthan. He also prayed for the speedy recovery of senior leader and former Union Minister ShriJaswant Singh, noting that his contribution to our nation is immense. The Prime Minister praised the State Government, and Chief Minister VasundharaRaje, for managing the drought situation, and helping the people tide over the difficult situation.
The Prime Minister stated that it the Union Government was committed to make One Rank, One Pension, for the Armed Forces, a reality, and added that the Government has worked towards making it possible. He mentioned the Jan DhanYojana, and said that the poor have now gotaccess to banking facilities. He also spoke about the UjjwalaYojanafor cooking gas, and the significant progress made in electrification of 18,000 unelectrified villages. The Prime Minister praised Chief Minister VasundharaRaje for her commitment towards the benefit and progress of Rajasthan.