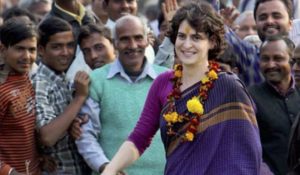 Congress has appointed Priyanka Gandhi as Congress general secretary & in charge of Eastern Uttar Pradesh. Congress leader Jyotiraditya Scindia has been appointed Congress General Secretary for Uttar Pradesh West while KC Venugopal has been named Congress General Secretary (Organisation).
Asked whether she would contest the national election next, even Rahul Gandhi was non-committal. “It is up to Priyanka if she wants to,” the Congress chief said. Priyanka Gandhi’s entry into politics has been long awaited by many in the party. But despite a buzz ahead of every election, she had mostly been active behind the screens. She had been a party to all the big decisions in the Congress, including the recent choice of Chief Ministers for the Congress in the heartland states of Rajasthan, Uttar Pradesh and Chhattisgarh, which was a tricky issue due to the presence of multiple contenders.