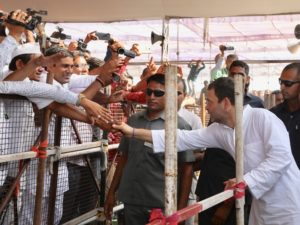 Congress president Rahul Gandhi attacked PM Narendra Modi on Thursday on corruption, including the Rafale fighter deal and Mallya’s escape from the country, saying, “Gali gali mein shor hai, Hindustan ka chowkidar chor hai.” Addressing the tribal population of Udaipur division at Sagwara, near Dungarpur in poll-bound Rajasthan, Rahul appealed to them to defeat BJP in the coming elections, which he described as a “fight of ideologies”. Rahul said Congress worked for the poor while the BJP served five to 10 industrialists.
“Modi wants a bullet train with Rs 1 lakh crore, while the country’s entire railway budget stands at Rs 1.5 lakh crore. He could not give Rs 2,000-crore for the Dungarpur-Banswara-Ratlam railway line, which would have opened the doors of development for the poor in this region,” Rahul said amid applause from the huge crowd from the six districts of Udaipur division. Targeting CM Raje as well, the Congress president claimed, “Your CM’s business partner, Lalit Modi, gave money directly to her son.” Rahul, however, did not specify when and why Lalit Modi allegedly paid Raje’s son Dushyant Singh, BJP MP from Jhalawar-Baran.