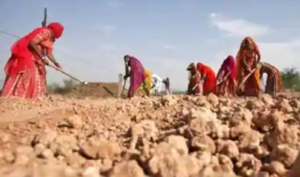 Chief Minister Shri Ashok Gehlot has requested the Union Government to raise the limit of guaranteed employment under Mahatma Gandhi National Rural Employment Guarantee Scheme (MGNREGS) from 100 to 200 mandays per family. Also, the entire cost of material component (including the state government share) for works carried under the MGNREGS should be provided by the Centre. This would maximize the benefits of freshly initiated ‘Garib Kalyan Rozgar Abhiyan’ of the Government of India at ground level.
Shri Gehlot demanded this through a letter written to Prime Minister Shri Narendra Modi on the occasion of nationwide launch of the new employment campaign by the latter on Saturday. As per the Garib Kalyan Rozgar Abhiyan, migrant labourers, who have returned from other states to their homes following Covid-19 crisis and a subsequent nationwide lockdown, would be provided the means of livelihood at nearby places. Works related to construction of permanent and productive public properties, including MGNREGS, would be undertaken under this scheme.
The CM wrote that providing additional 100 mandays for MGNREGS would benefit 70 lakh rural families in Rajasthan including the families of migrant labourers, who have returned here in large numbers. COVID-19 pandemic had impacted employment of lakhs of people adversely. In this time of crisis, the deprived and economically backward sections of the society would get some economic support in the rural areas. Rajasthan state government had already started providing MGNREGS job cards and guaranteed employment to such migrants, who returned to their home districts following loss of job or labour works due to lockdown and corona epidemic in different states, he added.
According to Shri Gehlot, presently over 50 lakh labourers are working at MGNREGS sites in Rajasthan and most of them would complete their 100 mandays tenure would be completed next months. “Thus, it is urgently required to raise the limit of guaranteed mandays for the MGNREGS workers,” he said. Also, for yielding maximum benefits of the Garib Kalyan Rozgar Abhiyan on ground, the union government should provide the entire amount of material component for the MGNREGS works to be carried out under this scheme, the CM demanded. The Chief Minister further requested the PM Shri Modi to provide 5 kilograms of wheat per person per month and 1 kilogram chana (gram) per family per month as free ration for two months to 3,57,258 needy families in Rajasthan.
PM Shri Modi launched the ‘Garib Kalyan Rozgar Abhiyan’ through video conference by initiating construction works at Telihar village of Khagdia district in Bihar. CM Shri Gehlot and Deputy Chief Minister Shri Sachin Pilot joined this launch programme through video conference from the Chief Minister Residence. It should be noted that Rajasthan is among 6 states in the country where this abhiyan has been launched. Of all 116 districts across the country where works would be carried out under this scheme, 22 are in Rajasthan. Any district receiving over 25,000 migrants from other states, has been listed for undertaking 25 different works to be completed in 125 days. Pali, Udaipur, Sirohi, Dungarpur, Banswara, Rajsamand, Chittorgarh, Ajmer, Bhilwara, Jodhpur, Barmer, Bikaner, Nagaur, Sikar, Alwar, Karauli, Bharatpur, Hanumangarh, Jhunjhunu, Churu and Jaipur districts have been selected for carryingout labour activities under the Abhiyan.