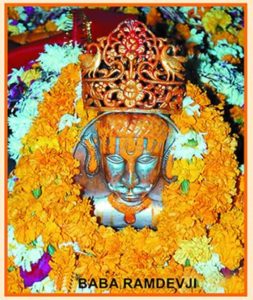 Ramdevera is Situated about 12 Kms to the north of Pokhran, the village of Ramdevra known after Baba Ramdev, a Tanwar Rajput and a saint who took Samadhi (conscious exit from the mortal body) in 1458 A. D. He had miraculous powers and his fame reached far and wide. Legend goes that five Pirs(saints) from Mecca came here to test his power and after being convinced, paid their homage to him. Since then he is venerated by Muslims also as Ram Shah Pir. The Hindus regard him as an incarnation of Lord Krishna.
Near the village, there is a tank known as Ramsar tank which is believed to have been constructed by Baba Ramdev himself. A large step well, the Parcha Baori is also situated nearby. Baba Ram Dev believed in the equality of all human beings, both high and low, rich and poor. He helped the down-trodden by granting them their wishes.Maharaja Ganga Singh of Bikaner constructed a temple around the Samadhi in 1931 A.D. Rice, coconuts, churma and wooden horses (toys) are offered to Ramdevji by the devotees.
A large fair is held here from Bhadon Sudi 2 to Bhadon Sudi 11 (Aug – Sept) which is attended by lakh of devotees who come in large groups from far and wide. Irrespective of their caste, creed or religious affiliations, these devotees throng the shrine dedicated to the saint. These groups organise night long singing of bhajans and kirtans to pay homage to Baba.
How to Reach:
Ramdevra village lies about 12 kms. from Pokhran in Jaisalmer district. Pokhran is connected to Jodhpur by a metalled road as well as by Rail. Ramdevra can be reached from Jodhpur and Pokhran by bus