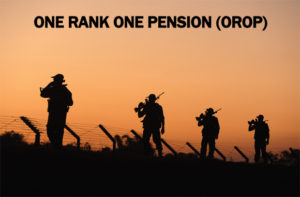 One Rank, One Pension (OROP) implies equal amount of pension for having served in the same rank and also having rendered the same length of service. For an example, a Sepoy who retired in 1995 would get the same amount of pension as the one who retired in 1996. The demand for the One Rank, One Pension (OROP) policy took a political turn after One Rank, One Pension (OROP) is not conformed on 15th August 2015 by PM Narendra modi even after more than 1 year in power. Prime Minister, Narendra Modi finally talks on the One rank, One Pension issue on 15th August 2015 after Mann ki Baat Radio programme and declared that while there has been a lot of talk around it, other governments haven’t been able to make much progress in the right direction. “The issue of ‘One Rank One Pension’ came up in front on every government. Some even made small promises. Issue could not be solved.” However, he assured that his government is committed to the cause and will do something about it very soon. “I assure the servicemen and I am saying it under the Tricolour from the Red Fort- we have accepted OROP. Some talks are still on.”
What is One Rank, One Pension: One Rank, One Pension (OROP), or same pension, for same rank, not for same length of service, irrespective of the date of retirement which was the basis for determining the pension and benefits of Indian Armed Forces till 1973. In 1973,the Third Central Pay Commission (3 CPC), in an “ex-parte” decision terminated OROP. The termination of OROP caused disquiet in the Armed Forces and has since become a cause of public protests by Armed Forces Veterans. An all party ten member Parliamentary Panel, known as the Koshyari Committee after its Chairman, examined OROP. The Koshyari Committee blamed the delay in implementing OROP on bureaucratic resistance and apathy.”. The Koshyari Committee unanimously found merit in OROP, and recommended its early implementation. OROP, an increasingly politicised, and often a misunderstood and misrepresented issue, in the run up to the Indian general election of 2014 , found favour with the INC, and the Bharatiya Janata Party (BJP). The top leaders of these parties, including Sonia Gandhi of INC, and Narendra Modi of BJP, made repeated public commitments to implement OROP.
One rank, one pension (OROP) Explained in Video by English Daily, Indian Express.
Post Views: 135
Editorial India News People Politics Rajasthan News